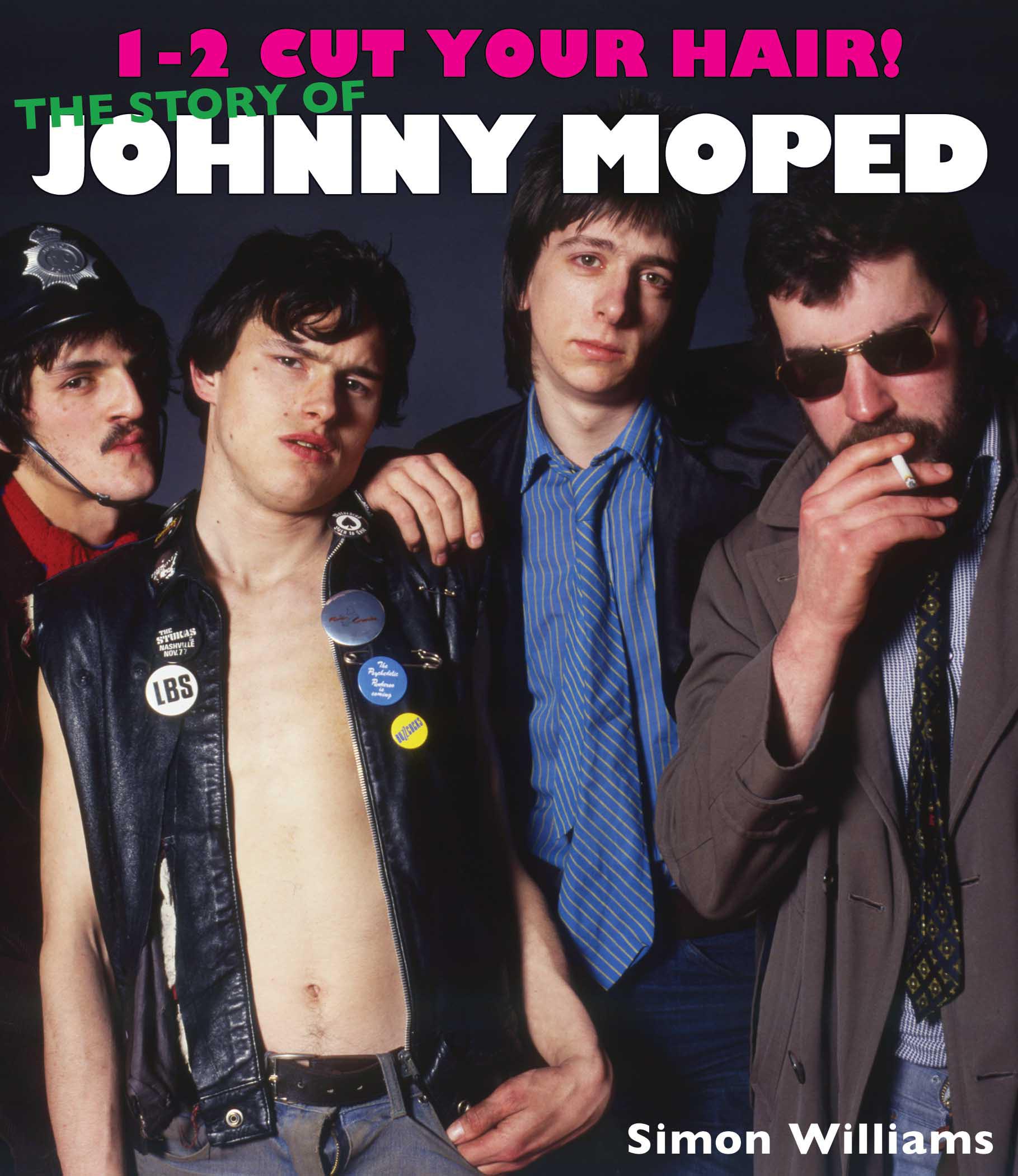 1-2 CUT YOUR HAIR – THE STORY OF JOHNNY MOPED

Johnny Moped – The man, the band, the punk myth, the none-hit-wonder, the absent singer, the comeback (and back, and back again) king. Five decades of heroic eccentricity, elusive musicality and accidentally saving The Electric Light Orchestra.

This story has it all and so much more. Featuring brand new interviews with Dave Berk, Slimy Toad, Xerxes and Johnny himself, plus exclusive insights from Captain Sensible, Marco Pirroni and a litany of old school expert fans and perturbed modern Moped riders, this is the only book you will ever need to read about one of the all-time great misunderstood and frequently mislaid rock ‘n’ roll troopers.

Formed in Croydon in May 1974, the band were a proto-punk band, initially calling themselves Johnny Moped and the 5 Arrogant Superstars before reverting to just Johnny Moped by January 1975. They became one of the pioneering punk bands that played at London’s legendary Roxy Club.

Their track ‘Hard Lovin’ Man’ appeared on the hit various artists album Live at the Roxy WC2 (1977). The band went on to sign with Chiswick Records and released three singles and one album, Cycledelic, before splitting up. A low-key reunion album (The Search For Xerxes) came out in 1991. Sixteen years after its release Cycledelic was listed as one of the best fifty punk albums of all-time by The Guinness Encyclopaedia of Popular Music.

A documentary about the band, Basically, Johnny Moped, produced by Fred Burns, premiered in September 2013. The film further cemented the band’s legendary status. ‘It’s currently available to watch in the UK via Netflix.

In 2016 the revitalised band released a new album It’s A Real Cool Baby’ on Damaged Goods Records, with a fourth studio album ‘Lurrigate Your Mind ‘following in 2019. With interest in the band at an all-time high, the time is now right for their story to be told.

Publisher of lovely books based in East London

.As well as all the handboundness, the woodcuts and profound utterances with Billy Childish's latest offering, you'll find a typically 'caught' portrait of yr man by .@driftingcamera. Link for 'poems to the match that ignites' here = https://thetangerinepress.com/POETRY/BC-PTTMTI/

What are you doing on New Year's Eve? well @KingSalamiTC3 will be playing the lovely What's Cookin' in Leytonstone, it's gonna be a hot NYE! More info here http://whatscookin.co.uk/events/new-years-eve-with-king-salami-and-the-cumberland-three/ and don't forget their latest album 'KISS MY RING' available here https://damagedgoods.greedbag.com/buy/kiss-my-ring-0/

Off to @TheWansteadtap tonight to see @derelict_london Paul Talling give a 'London's Lost Music Venues 2' book talk, first of two nights & both sold out. Books are available at the show from @NewhamBookshop or https://damagedgoods.greedbag.com or your local book seller @turnaroundbooks

When this happens, it's usually because the owner only shared it with a small group of people, changed who can see it or it's been deleted.
View on Facebook
· Share

In the run up to Christmas we're doing these two titles together for £25!Itt’s the two 'London’s Lost Music Venues' books by Paul Tallingand just for December they come with FREE postage in the UKCLICK HERE: damagedgoods.greedbag.com/buy/2-books-for/ ... See MoreSee Less

Great feature and interview with Paul Talling in the latest issue of OxFanzine about his latest book 'London's Lost Music Venues 2' which is available from all good booksellers and direct from us here damagedgoods.greedbag.com/dept/~books/ Derelict London @turnaround_books ... See MoreSee Less

OUT NOW - London's Lost Music Venues Vol 2 by Paul Talling and 1-2 Cut Your Hair by Simon Williams - in your local bookshop and online from all good retailers or from us damagedgoods.greedbag.com/dept/~books/ ... See MoreSee Less

An interview with the wonderful author Simon Williams about the Johnny Moped book! ... See MoreSee Less

This error message is only visible to WordPress admins

Please go to the Instagram Feed settings page to create a feed.